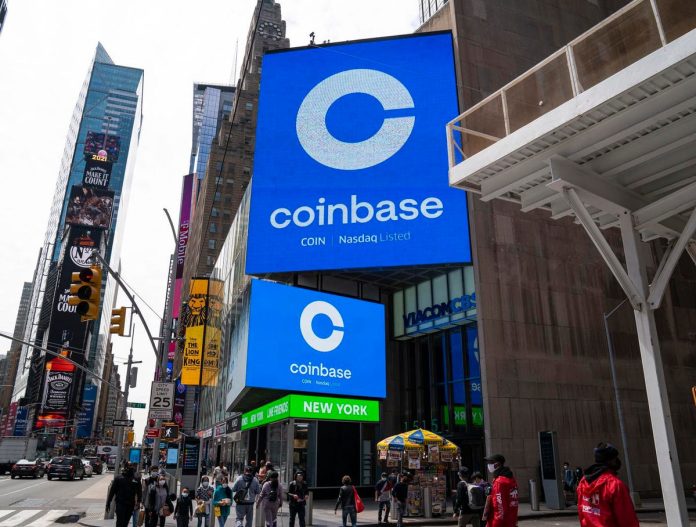 Coinbase Global Inc, the Nasdaq-listed cryptocurrency trading platform is seeing bad times as its share price is plummeting starting from the Pre-market to the early hours of trading when this article was written. The company’s shares are trading at 8.41% to $57.44, a show of investors’ response after the stock was downgraded from Buy to Sell by Goldman Sachs Analysts.

The analysts believe that the current market outlook will continually stir the degradation of the company’s revenue base.

The analysts argue that the company’s competitive advantage is at risk and they are forecasting breakeven to negative adjusted earnings before interest, taxes, depreciation, and amortization (EBITDA) — a popular measure of a company’s financial performance — over the next few years.

Coinbase exchange grew beyond measure from early 2021 to date. In order to slow down this growth, Chief Executive Officer, Brian Armstrong announced the firm has retrenched 18% or 1,100 of its entire workforce in a bid to come out of the current economic meltdown stronger. While this move was harshly prudent, Goldman Sachs analysts believe the firm’s efforts are generally not enough.

Coinbase announced last week that it will be closing down the Coinbase Pro platform by the end of the year as it has developed an Advanced Trading engine that is now integrated with the main Coinbase platform.

To the Goldman Sachs analysts, these efforts may largely reduce the revenue generated from the firm, as it looks to make itself more competitive through reduced trading fees. Binance.US exchange announced earlier that it is cutting off trading fees for some Bitcoin-specific trading pairs last week.

“..we are incrementally more bearish on the competitive environment and the outlook for fee rate compression given the announced merging of the Coinbase and Coinbase Pro platforms, which has the potential to reduce the switching costs and make lower pricing more easily available to its users,” the analysts wrote in a research note published on Monday.

The downgrade from Goldman Sachs is a big blow to the company, and its price target’s reduction from $70 to $45 is even a damning reputation for the firm and investors are reacting to this.