The Dogecoin price analysis indicates that there are some bullish indications today. For the fourth consecutive day, the DOGE/USD exchange rate has been steadily increasing. Today, DOGE bulls covered a range of $0.251 to $0.255, while the recent enthusiasm has resulted in huge gains for the currency.

The overall market has had mixed results over the last 24 hours. Bitcoin rose by 1.11%, while Ethereum fell by 1.8%. Meanwhile, Solana (SOL) is one of the worst losers, dropping more than 9%.

DOGE/USD 1-day price chart: The DOGE bulls are aiming for the resistance level of $0.257

The Dogecoin price analysis for the week has shown a steady rise since the start of today’s session. The resistance of $0.257, which appears to have been overcome quickly, is next. At the time of writing, the DOGE/USD pair was priced at $0.255, up more than six percent in value during the past 24 hours.

There is a bullish “Inverted Head and Shoulders” pattern on the longer-term price analysis, suggesting that the bullish trend will continue in the long run. In addition, according to Fibonacci calculations on the weekly chart, DOGE/USD appears to have reached the 38.2% retracement level.

Therefore, the DOGE/USD price is heading upward in the near future, which is indicative of further gains. The next stop for bulls appears to be at the key resistance level of $0.257. Closing above that level would open doors to new highs before retesting resistances in decline.

The price of DOGE/USD has risen by about 5% owing to a rise in volatility, with the Bollinger bands coming into conflict.

The indicator is signaling a buy. As the price approaches or breaches the top band, it is expected to rise considerably. When comparing the current price level with the mean average of the indicator, there appears to be little difference (it’s nearly touching). The slight bulge in value indicates that cryptocurrencies are gaining greater buying traction.

The RSI is in the neutral zone right now, with an upwards curve and approaching the overbought limit. The RSI has been climbing since September 29, when it was close to the under-sold region, and it has maintained a consistently higher score ever since. Despite being neutral, however, the RSI indicator shows an increasing amount of

The MACD oscillator is clearly bullish, as seen by the dark green color of the histogram. As Dogecoin’s bull momentum builds, the histogram bars are getting bigger. After October 1st, the MACD indicator indicates a continuation of bullish momentum.

The price chart for Dogecoin shows that volatility has shot up dramatically since October 4th, as can be seen on the 4-hour graph. The price has closed outside the upper limit of the Bollinger bands numerous times throughout this period, as candlesticks exit and above the top band, demonstrating maximum bullishness.

At the time of writing, the DOGE/USD pair is testing a critical resistance level at $1.039. The overbought limit of the 4-hour RSI in the chart was 69 as it moved ahead this week. The RSI had been in an overbought zone for four consecutive days before yesterday’s close.

The short-term moving averages 10, 20, and 30 are all in a buying mood, as are the exponential moving averages EMA10, EMA20, and EMA30. The majority of long-term MAs and EMAs provide further proof that the DOGE/USD assets are good buys.

As seen in the Dogecoin price analysis, the market has a solid bullish momentum. The short- and mid-term technical indicators support DOGE asset purchases and indicate that the coin’s price value may rise even more. Traders should plan for a potential breach of support at $0.257 in the next several hours as the price rises 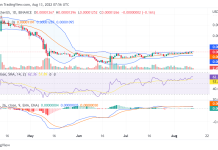 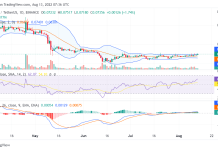 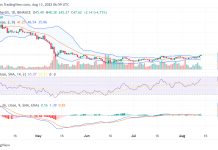 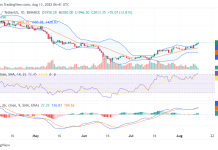 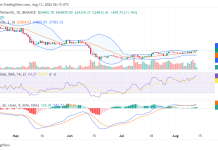 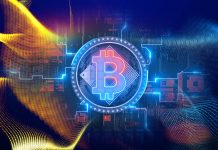