Home DeFi News - Decentralized FInance What can the past tell us about Bitcoin’s future? 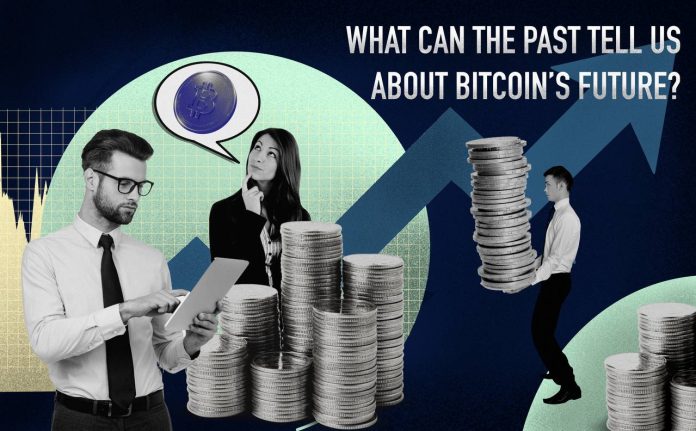 After the November record of $69,000, BTC lost more than 75% of its price – in June, its price fell below $18,000 and later corrected to a level of just over $20,000. The main cryptocurrency pulled the entire market with it – its capitalization decreased by more than a trillion dollars, and the value of most assets fell below 80-85%, causing market panic and many margin calls.

Against the background of general concern, financial analysts say that the dynamics of the price of Bitcoin are cyclical and the value of the first cryptocurrency has experienced a fall more than once – only to later rise to a new record. The fact is that it directly depends on a process called halving, which occurs in the blockchain network about once every 4 years.

Halving is a reduction of the miner’s reward for each mined block. Initially, miners received 50 bitcoins, in 2012 the number dropped to 25 coins, in 2016 – to 12.5, and in 2020 – to 6.25. This procedure makes the issuance of cryptocurrencies controllable – it becomes more and more difficult to get a coin, and they are issued more and more slowly, which allows for curbing cryptocurrency inflation. After each halving, the value of the first cryptocurrency increased many times over. For example, after the first reduction in the reward, bitcoin went up from $11 to $1,100, and after the second, from $600 to $20,000.

Given the price cycles, many experts predict that the decline in the cryptocurrency market will last until the end of 2024 or early 2025 (halving is expected in May 2024). “Bitcoin has been in a downtrend since November of last year. According to the hypothesis of 4-year cycles in Bitcoin, 2022 may turn out to be a repeat of 2018 and 2014 – the bear market years”, says a team of analysts from one of the major US hedge funds.

Another lesson from the past is the fall from its All-time high: every time BTC fell below 60%, investors entered into an accumulation stage and the price reversed its movement. Considering that when breaking through the $18,000 mark, the cryptocurrency dropped by more than 70%, this is a direct signal for an early reversal and price growth. Since the beginning of 2022, the volatility of Bitcoin has been extremely high. To a person who is not intimately familiar with the cryptocurrency industry, such instability may seem dangerous. However, this is a familiar story for Bitcoin – to surprise investors even when no one expects it.

However, many experts believe that the “crypto winter” is not such a bad event. Downturns in the crypto market are times when the industry can take a break and create the infrastructure and applications that will make it easier for newcomers to use the products when they enter the industry during an upcoming bull market.

The guys from SunMining created a company that has no analogs in the field of cryptocurrency mining – an environmentally friendly mining farm that provides cloud mining services. The working model is simple – you rent the farm’s capacity by paying for the contract on their website (usually, the price of the contract is affected by the duration of production, the amount of leased capacity, and the referral program) and become a full-fledged miner. The only nuance is that you do absolutely nothing – professionals do it for you, and the commission for their work is included in the contract.

The current situation with Bitcoin is an excellent opportunity to enter this market for both beginners and experienced investors. Given that hardware prices have become lower, cloud mining contracts have also become cheaper. Therefore, if you want to accumulate cryptocurrency at such a low price, be sure to try cloud mining with SunMining company.

Omicron ($OMIC) Up 131% Since Announcement of New Covid-19 Variant